ALL OF TIME AND SPACE, EVERYWHERE AND ANYWHERE; EVERY STAR THAT EVER WAS; WHERE DO YOU WANT TO START?

With The Doctor still suffering from the effects of his regeneration Rose takes him to the only place she knows he will be safe, her house with Jackie and Mickey!

Rose and Mickey take the opportunity to go out and do some Christmas shopping when they are attacked by Robots dressed as Santa. It looks like they have been lured here by the regeneration energy from The Doctor. New Prime Minister Harriet Jones is threatened by the leader of the Sycorax who is also threatening 1/3 of the population by the use of Blood control.

A Christmas tree begins to attack at Jackie house and The Doctor comes to their rescue however is still weak from regeneration. Jackie, Mickey, Rose and The Doctor head to the Tardis to escape but the Sycorax transport the Tardis on board their ship high above London.

Now fully recovered The Doctor challenges the Sycorax leader to a fight to the death, which despite him losing his hand (which he regenerates) he wins the fight and the Sycorax are to leave the planet. Harriet Jones has other ideas as she instructs Torchwood to destroy the ship against the wishes of The Doctor. 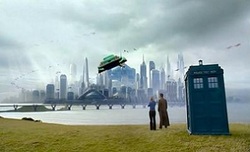 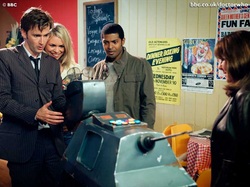 episode 4 - the girl in the fireplace

episode 5 - rise of the cybermen

episode 6 - The Age of steel 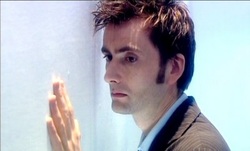